Which bat species are found in Lancashire?

As counties go, Lancashire is completely batty! Find out which bat species can be found across the North West.

Eight species of bat are resident across Lancashire, the smallest weighing in at less than a £1 coin.

Our most common bat is also our smallest. It weighs just 3 – 8g but is by no means cute and cuddly. Common pipistrelles are voracious predators and incredibly agile up in the air. Look out for a fast and jerky flight full of sharp twists and turns as they pursue insects which they then eat on the wing.

It was only recently that pipistrelle bats were separated into two different species. We have both in Lancashire, with soprano pipistrelles being the less common of the two. Experts think there are subtle differences in how the bats look, but the best way to tell them apart is with a bat detector. The calls of soprano pipistrelles are picked up at a higher frequency (55 and 80kHz, as opposed to between 45 and 70kHz).

Noctule bats are one of our largest species, weighing in at a chunky 18 – 40g! They are often the first bats to fly at night, sometimes even before sunset, which gives you a good chance of seeing one. They roost in holes in trees and are rarely found in buildings.

Noctule colonies produce loud, metallic chirping sounds that can be heard up to 200 – 300m away on hot days

Noctule bats hunt with a characteristically powerful, direct flight and, like pipistrelles, will feed on the wing. During spring they take advantage of a bounty of small insects like midges, but as the months warm up, move onto beetles and moths. Noctules have even been known to take prey from the ground!

This amazing little bat hunts over water, skimming just above the surface to pick up insects like mayflies and caddisflies. Though occasionally found in buildings near water, Daubenton’s bats much prefer roosting in underground sites like tunnels and bridges over canals or rivers, or in caves, mines and cellars.

The large, narrow ears and pointy face of the Natterer’s bat are irresistible. Though a medium-sized bat, it can be difficult to see, hunting amongst trees where it snatches small moths, beetles, spiders and other prey from the foliage. The UK population of Natterer’s bats is of international importance.

Did you know that the brown long-eared bat is the most common bat species in Lancashire after the pipistrelle? That isn’t to say you’ll see one – like the Natterer’s, it flies against a backdrop of dark trees rather than against the sky, plucking insects from the leaves. Your bat detector might not be much help either: brown long-eared bats echolocate extremely quietly.

Brandt’s bat looks really similar to the whiskered bat and was only recognised as a separate species in 1970. The two species even roost together, though in separate colonies.

The Brandt’s bat is ever so slightly larger than the whiskered bat but both have wonderfully shaggy fur. It feeds low to the ground in woodlands and near water.

A fast and fluttery flier, the whiskered bat is an excellent predator of spiders, moths and other small insects. It flies a regular path alongside hedgerows and woodland edges, searching for food, but will also feed in the tree canopy.

How to see bats in Lancashire

Why not go for a dusk walk, or peer out of your window and look for bats snatching insects from around street lights? You may even be lucky enough to have them whizzing over your garden.

Attract bats to your garden

Did you know that there is an International Bat Weekend? This takes place between 25 – 26 August and is the perfect excuse to get out and try to see some of Lancashire’s most common bats. Why not grab your loved ones and make a yearly event of it? 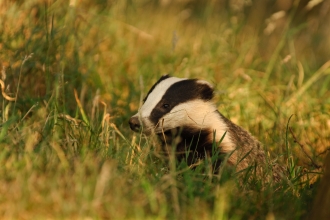 Plan a wild year ahead with our seasonal guides to the wildlife you can see, and where, across our region.

Are bats really blind? How do bats stop themselves feeling dizzy after hanging upside-down all day? Super-fast muscles?!

The UK is full of weird and wonderful wildlife: grasshoppers with ears in their bum and snakes that give birth to live babies. But some…

Having spent most of the day indoors, I decided to take advantage of yesterday evening’s warm, dry weather and go for a walk. There is a…