Vicki was brought up on the family farm in Lancashire and has a passion for wildlife and the countryside. With more than 10 years of experience in fundraising, Vicki helps us raise vital funds for nature conservation.
Volunteers have been integral to the Trust since we first began fighting for local wildlife. One of our amazing volunteers, Janet Edmunds, has written all about some of her earliest volunteering memories.

Lancashire Wildlife Trust was quite different in 1974 when I and my late husband, Malcolm, joined shortly after we moved to Preston, Lancashire. There were probably about 400 members in those days, with one recently appointed paid officer. It was called the Lancashire Naturalists’ Trust, founded by naturalists, whose main interest was to record species and their distribution. Organisationally it was divided into four regions: Northern, Central, Manchester and Merseyside with South West Lancashire; we were in Central. Each region had a committee of volunteers, and our first Lapwing magazine appealed for new committee members for the Central Region, so we volunteered. The region extended from the Fylde Coast to the Lancashire/Yorkshire border. Later, the Fylde and Eastern regions were formed, which gave Central region a more manageable area of Preston, Leyland and Chorley. There were Trust-wide committees, including Scientific with Reserves and Publicity with Membership and a Council. At various times, we were both on Council and various Trust committees.

The Central Regional Committee Chairman was Michael Fitzherbert Brockholes, who later became the Trust’s first President. It organised everything in its area and had representatives on the main committees. The Regional Committee covered promotion; we lead guided walks, gave talks, manned stalls and helped establish a group in Fulwood, for which Malcolm and I held a very successful annual open garden for 10 years. Malcolm and I undertook several plant surveys, which were helpful for later work.

The committee initiated the establishment of reserves, which was difficult and only really bore fruit after several years. Red Scar, Tunbrook and Boilton Woods was the most important reserve with which I was involved, particularly during the 1980s. Establishing it meant protracted negations with the owners: Preston Borough Council, the Church Commissioners and the then Central Lancashire New Town Corporation. The Trust managed to negotiate licences for, or in one case purchase of, much of the woodlands. I set up a Management Committee of local volunteers who had been interested in the woodlands for years.

One evening, we were just finishing leading a guided walk along the footpath at the base of Red Scar Wood, when one of the participants spotted some men in the dusk in the trees. Realising they were disturbing a badger sett, I asked someone who was leaving to stop at Fulwood Police Station. I went up to the top of the wood to meet a policeman, but unfortunately a man must have seen me against the skyline and called to his mates that a copper was coming and ‘that woman’ was with him. They left but let down my tyres. They were not caught, but a local policeman had heard the then recently appointed Lancashire Police Wildlife Liaison Officer talk about the new Badger Act. He was very keen to take initiative and so went out the next day and came across someone else with a dead badger in a sack. The initial group were not identified, but the second man was accused in a Magistrates Court and fined. A local resident who had been studying badgers in the woodland for many years gave evidence. This was one of several episodes that lead to the foundation of the Lancashire Badger Group.

As the number of paid staff at Lancashire Wildlife Trust increased, the role of volunteers in the organisation of the Trust changed, but their work in those early years laid its foundation. 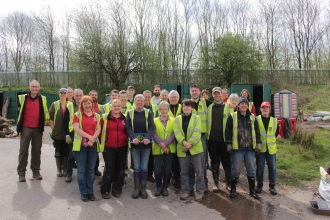 With 38 nature reserves to discover across the North West, there is a Lancashire Wildlife Trust reserve for everyone.

Volunteering for The Wildlife Trusts isn’t just great for wildlife, it’s good for you too as nature and wellbeing manager, Dom Higgins…

There is nothing better than walking into a room to see a sea of smiling faces, welcome to Volunteer Conference 2019.

Making an impact with Myplace #iwillWeek

This week (12th - 16th November) is #iwillWeek, a UK-wide campaign that aims to make social action a part of life for many 10-20 year…