Rare insect-eating plants, missing from the region for more than 150 years, have been planted on Risley Moss, and are busily catching flies.

Sundew and bladderwort have been returned to the moss as part of the £265,000 Manchester Mosslands Species Reintroduction project.

Great sundew, oblong-leaved sundew, bog asphodel and white-beak sedge were planted by Josh Styles of the North West Rare Plant Initiative today. Josh discovers seeds and cuttings in other, abundant areas and grows the plants at his home, before planting them on the moss.

He said: “Most of these plants are rare in the North West, some of them have been extinct for the past 150 years.”

On another part of the moss, another carnivorous plant, the bladderwort has increased by around tenfold in one of the ponds.

The plants died out when mosses were drained for agriculture and housing. Restoration work has made these areas wetter and perfect habitats for the plants and insects like the Manchester argus butterfly and the white-faced darter dragonfly.

Both insects are part of the reintroduction project, with the Manchester argus due to return to Greater Manchester in 2020 for the first time in 150 years.

The reintroduction was made possible with funding of £265,000 from Veolia, an environmental services champion, which has actually awarded £2.8 million to peatland projects over the past year. It has also been supported by The Casey Companies.

The Lancashire Wildlife Trust’s Mosslands Officer, Mike Longden, said: “The rewetting of the mossland areas is creating ideal homes for these plants, where more than 95 per cent of the peat has been extracted for fuel and fertiliser or lost to agriculture and building.

“While species of plants like the sundew, sphagnum moss and cottongrass have returned without much encouragement, they still need our help. And other plants need to be reintroduced after years away from this, their rightful home.” 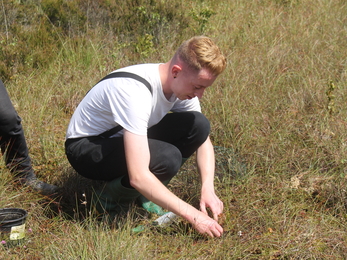 Josh Styles plants sundew on the moss by Alan Wright 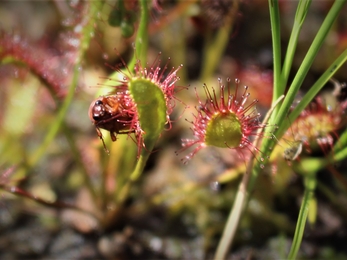 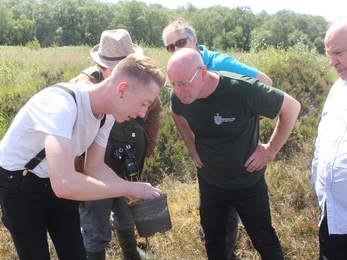 The team on Risley Moss

Manchester argus flies back to our peatlands after 150 years

A butterfly that has been extinct in Manchester since 1850 will return to the area once more, with help from our dedicated…