Harriers, hawks and falcons, oh my! How to identify birds of prey

Learning how to identify birds of prey (also known as raptors) can be confusing, but with so many amazing species flying, hunting and breeding in our region, it is well worth it.

Razor sharp vision, deadly bills and talons and incredible aerial acrobatics; our region’s raptors have it all. They are some of the most exciting of all birds to spot while you’re out and about, but do you know which species is which? Here are some simple ID tips.

Of all of Britain’s birds of prey the buzzard is the most common and most widespread, having experienced a remarkable comeback from the brink. Buzzards soar on thermals above countryside, motorways and everywhere in between – look out for their long, broad, eagle-like wings with primary feathers that stick out like fingers, and a short fan-like tail. They often make a lovely ‘mewing’ call as they glide. You may also see buzzards perched on fence posts or even hopping along the ground on the hunt for earthworms.

If you see a bird hovering frantically above vegetation, it is a kestrel. These petite little falcons are really adaptable and have even started breeding in cities as well as traditional sites like heathlands and grasslands. Visit Brockholes any day of the week and you are sure to spot our resident male kestrel, Kevin, who is famously unfazed by visitors.

Kestrels have a distinctive dark ‘tear’ mark extending down from each eye to their chin, a grey head (in males), grey tail with dark bands and a creamy, speckled underside. The rest of their feathers are chestnut brown. In flight you can see their pointed wings and long tail.

The merlin is one of the scarcer birds of prey in our region, having suffered due to pesticides such as DDT. They are now mostly found on Manchester’s magnificent mossland sites (Cadishead Moss, Little Woolden Moss and Astley Moss) following our dedicated conservation work. Winter is the best time to try and see them as they leave upland areas and congregate around our coasts, often joined by other merlins from the bitter shores of Iceland and Northern Europe.

The merlin is the smallest of all British birds of prey and has quite a distinctive flight: rapid wingbeats with occasional glides and its wings held close to its body. Male merlins are blue-grey above and cream with black streaks underneath. Females are grey-brown with dark streaks.

Hobbies are migrants and we don’t have a resident population in the UK. One of the best places to see them is Brockholes Nature Reserve in Preston, where they spend many summer days hunting dragonflies, swallows and martins over Meadow Lake and Number One Pit.

Hobbies largely hunt over wetlands but can also be seen flashing over woodlands and heathlands where there are plenty of large insects to eat. They are about the size of a kestrel but have longer, pointier wings (like a giant swift) that help them perform impressive high-speed aerial acrobatics. This bird’s red ‘trousers’, dark moustache and mask, and slate grey plumage are its most distinctive features.

Female and young sparrowhawks are often confused with kestrels, but the latter has completely dark eyes, while sparrowhawks all have piercing yellow or orange eyes. Males are the most recognisable; much smaller than the females with a beautiful blue-grey back and orange-barred chest. These small birds of prey are incredible hunters that are perfectly-adapted to pursuing prey in confined spaces like dense woodland and, indeed, our own gardens.

Is there a more perfect aerial predator? Peregrine falcons are the fastest animal on the planet and are built for speed and pure grit. In flight they are much bigger and bulkier than kestrels, with broader and more pointed wings and a shorter, stubbier tail. Peregrines are also slate-grey rather than brown, with a white underside decorated by dark bars, a white throat and cheeks, and a black mask.

Peregrine falcons hunt by ‘stooping’, where they fold in their wings and dive after birds like pigeons, songbirds and even ducks, often taking out their prey in mid-air. They can easily exceed speeds of 200mph! Traditionally nesting on cliffs and crags, they have begun moving into our cities and are at home atop many skyscrapers, churches and cathedrals. In fact, they are one of the birds of prey in Manchester city centre.

Like hobbies, ospreys are migrants that fly here to spend the summer feeding and breeding before leaving again to soak up the sunshine in warmer climes over winter. They are huge birds with a wingspan of almost six feet, are dark above and bright white below, with dark patches on their wings. Watching one hunt is one of nature’s real spectacles; you can’t help but hold your breath as the bird stoops and crashes into the water with its talons outstretched, emerging again with a writhing fish speared in its impressive feet.

We don’t currently have any breeding pairs of ospreys at our nature reserves, but with birds seen flying over Mere Sands Wood and Lunt Meadows on migration, and one osprey stopping off at Brockholes for a couple of days in 2017, we hope it is only a matter of time before a pair chooses to raise a brood on Brockholes’ osprey platform.

Where British birds of prey are concerned marsh harriers are one of the real success stories, having bounced back from near extinction. We now have nearly 400 pairs in the UK with a good number either breeding, roosting or hunting on marshland and reed beds in Lancashire and Merseyside, including our own Lunt Meadows nature reserve near Maghull.

Male marsh harriers are brown above and ginger underneath, with black-tipped grey wings. Females are a gorgeous chocolate-brown with a golden-yellow throat and crown. 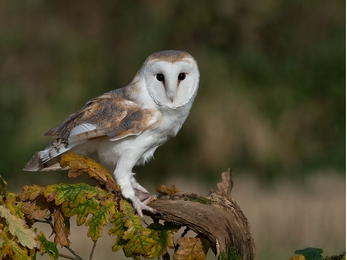 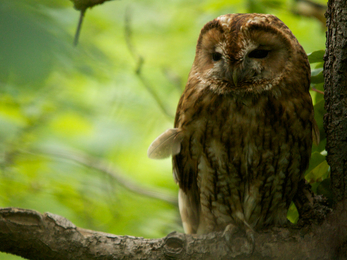 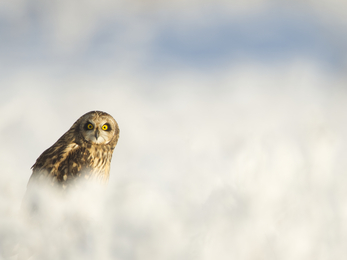 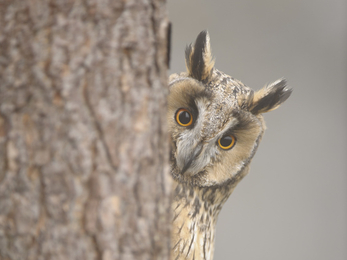 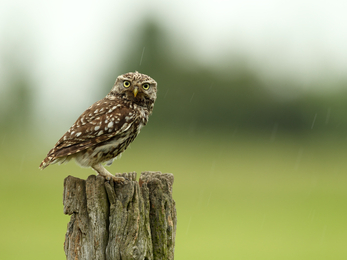 We couldn’t talk about Manchester, Merseyside and Lancashire birds of prey without mentioning the wonderful owls that call our region home. They all cut different figures to the raptors mentioned above, with more wedge-shaped wings and a different flying style.

There are lots of ways to identify owls – click the button below to read more about them.

Learn how to identify owls 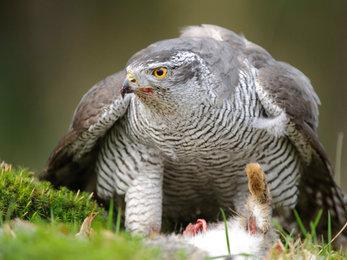 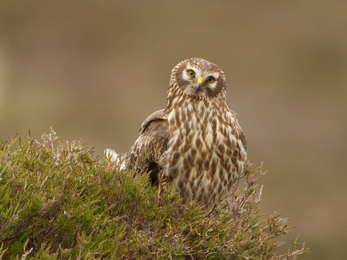 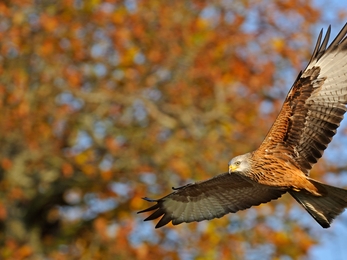 Other birds of prey in Lancashire, Manchester and North Merseyside

A few birds of prey are a real rarity in our region. Goshawks, the heat-seeking missiles of the bird world, have and still do face persecution. They are also incredibly secretive so records in our area are patchy. You have a better chance of seeing a hen harrier than a goshawk, but these, too, are very rare birds of prey and face rampant persecution. The Forest of Bowland is a good place to try during spring and summer, but winter offers the best chance of seeing one as hen harriers head to our coasts and estuaries.

Rare but not completely unheard of is the red kite. Bouncing back from near extinction, these stunning birds of prey have strongholds in the south, in Wales and, increasingly, Yorkshire. Sightings in Lancashire have increased over recent years so it’s only a matter of time before we see that v-shaped tail in our skies.

You can help our birds of prey thrive

From restoring the mosslands that merlins need to thrive, to lobbying Government for Nature Recovery Networks that link up fragmented populations, we are working passionately to help birds of prey thrive in our region. You can help us – please donate or become a member today.

How to tell the difference between similar wading birds

The UK’s wading birds are some of the hardest species to tell apart, but never fear! We’re here to help you out with some pointers.

Allow the wild to come to you

Now it’s time perhaps to bring the wild home as another lockdown starts and #12DaysWild and the 12 Days of Christmas comes to a close.…