Communal living and screams in the night: The secret lives of foxes

Foxes are one of our most fascinating mammals and we’re still learning new things about their secretive lives. Let’s take a look at some interesting fox facts.

Why do foxes scream in the night?

If you’ve ever heard a pained cry in the dead of night that sounds like a woman screaming, then you’ve probably heard a female fox (or ‘vixen’) letting a male (or ‘dog’) fox know that she is ready to mate (listen here). These screams are often answered by the ‘hup-hup-hup’ bark of the dog fox.

The mating season takes place in January, and if you feed foxes in your garden you may have noticed that their visits have stopped, with mating taking priority.

What time of year do foxes give birth?

Following the January mating season, vixens start finding a place to give birth and clear out potential den sites. When they’ve decided on the perfect spot, they bed down and give birth to around four or five cubs in March. With cubs born deaf, blind and unable to regulate their own body temperature, their mother rarely leaves them for the first few weeks – she gets her food from other adult foxes in the group.

Do foxes live in groups?

Though they are solitary hunters, foxes do tend to live in small family groups that are mostly seen together during the breeding season. There are usually three to four adults in each group: a dog, a vixen and a few female helpers from previous litters. Both the vixen and dog fox care for new cubs while the ‘helper’ foxes bring food to the nursing vixen.

While foxes can be really noisy during the January mating season they are mostly silent at other times of the year, but do have a repertoire of around 28 different, subtle sounds that they use to communicate with each other. As well as their well-known triple box, male foxes are also known to make a loud ‘a-woo’ noise that sounds similar to a domestic dog (listen here). Fox cubs make a playful ‘ack-ack-ack-ack’ noise as they play fight with each other (listen here).

Where do foxes live?

Foxes are excellent diggers and live in underground burrows they have excavated called ‘dens’ or ‘earths’. In fact, each family group of foxes usually has more than one earth.

During the summer months many foxes find sheltered places above ground to rest. Though these are usually hidden spots in dense cover like bramble patches or piles of rubbish, you may be lucky enough to spot a fox napping in the sunshine out in the open. And how’s this for a fun fact? Some foxes share setts with badgers, taking over an abandoned section.

Are there more urban foxes than rural foxes?

Despite urban foxes being much easier to see than rural foxes, most foxes do live in rural areas such as woodland, farmland and wetland habitats. Rural foxes are very shy and, unfortunately, have declined by 34 per cent since 1995. You are much more likely to see a fox trotting down the street or denning under your shed.

You can help to protect foxes across Lancashire, Manchester and North Merseyside by becoming a member of the Trust and supporting our work. We protect and nurture local wildlife as well as the precious wild places it calls home, but we receive no government funding and couldn’t do what we do without your support. 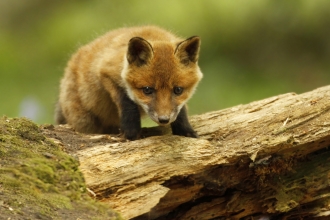 The Red Fox is an iconic species in the UK, immortalised in stories and legend for its cunning and stealth. This orangey-red dog, with…