Flick is fed by Rachel

An appeal to raise funds to protect the North West’s only stronghold for red squirrels has reached its first target.

Funding for our Red Squirrel Project had stalled because of the Coronavirus pandemic.

Kind-hearted supporters have, so far, raised £2,000 in a JustGiving appeal to help to keep the project running and officers in jobs until they can apply for support next year.

And Flick, an orphaned red squirrel has now joined the campaign to help the project, which may not be around to protect kittens like her in the future.

Red Squirrel Project Officer Rachel Cripps said: “Flick was about five-weeks-old when she was found in a garden in Hightown in early August. She was physically fine but was a bit dehydrated.

“She is developing really quickly and is now ready to go into the large indoor cage. She will go into the outdoor release pen at the end of August or the beginning of September. She will spend a couple of weeks before we open the door to freedom.”

Campaigns Manager Alan Wright said: “Every year we get up to a dozen orphaned red squirrels in and around their Formby stronghold. Our team care for them until they are ready to be released back into the wild.

“Without Rachel and her team these young squirrels would not survive and that is a heartbreaking thought.”

The Red Squirrel Project is more than just orphaned squirrels, it creates prefect habitats for our native squirrel and monitors their numbers to ensure they are healthy. Without their work the red squirrel population would not have survived in the North West.

There are positive signs that the population is recovering from the most recent outbreak of squirrel pox in 2018-2019, but the critical work continues.

Rachel said: “Sadly, the project will come to an end in September if we can't find enough funds to continue. This would be devastating news for our officers and local volunteers who have worked so hard to protect the reds. It would be another tragic consequence of the pandemic if we lost our red squirrels.”

Together with volunteers and communities, the work of The Wildlife Trust has seen the population recover and flourish after the worst outbreak in 2008.

The project is confident of applying for funds next year but, as with all charities at the moment, funding is hard to access.

Alan said: “This project is protecting a creature that was once common in every area of the North West, now it is limited to a small pocket of Merseyside and West Lancashire. It is vital that its work continues and the red squirrel begins to increase in numbers again.

“We are so grateful to everyone who has donated to the appeal already but we need more to get us through this difficult period. It also helps to show that there is such a great deal of support for our native red squirrels in the local area.

“Flick is just one of many beautiful squirrels living safely in our Merseyside woodlands. We want her and all her family and friends to flourish.”

The stronghold is the most southerly outpost for red squirrels in England. The squirrels have been seen in western areas of Lancashire and Greater Manchester in recent years as numbers have increased. Red squirrels were common across the whole of the UK a century ago, now they are confined to the North and Scotland.

We are in the process of securing funds for the project, however the progress has now been delayed by at least 12 months. Existing funding ends in just under a months’ time.

People can donate to help support the Trust in continuing its work to safeguard our population of red squirrels by clicking the button below.

Donate to our Red Squirrel Project 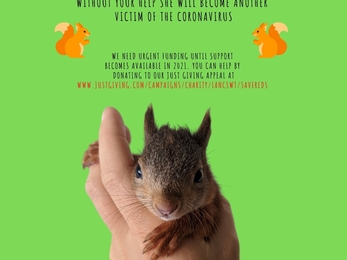 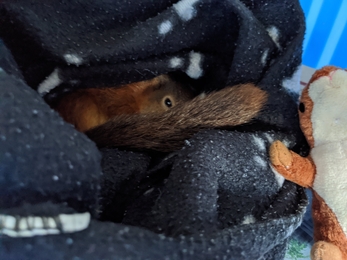 Flick curled up in bed 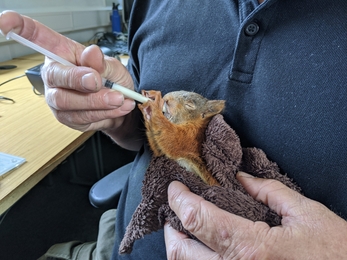 Flick is fed by Rachel

Wild improvements on the way at Lunt Meadows

Thanks to generous funding from Biffa Award, we're on track to make our Lunt Meadows nature reserve even better for people and…

Congratulations to our Merseyside team who accepted an award in the Echo Environment Awards 2020, last night.

Over the last three years conservationists have been giving the UK's rarest lizard a helping hand. Captive bred sand lizards have…