The plight of red squirrels

The Eurasian red squirrel (Sciurus vulgaris) is our only native species of squirrel, but it is under threat, having nearly completely disappeared from most of the UK in just under 150 years: declining from around 3.5 million to just 140,000.

In 2020 the Mammal Society released an official Red List for British Mammals, highlighting the species most at risk. The red squirrel is classified as ‘Endangered’ and is one of the 19 species considered at risk of extinction in Britain.

But Lancashire Wildlife Trust, in partnership with Red Alert, are working hard to ensure this doesn’t happen in Merseyside and Lancashire. Despite two outbreaks of squirrel pox in the last 12 years, the population is still going strong thanks to the perseverance and dedication of our volunteers and Project Officers.

It is our aim that red squirrels will once again become a common sight throughout North Merseyside, West Lancashire and beyond.

Report your sightings of red squirrels

What to do if you find a sick/injured red squirrel

Why do we love this species so much?

For many of us the red squirrel brings back childhood memories of Squirrel Nutkin, a character from the famous Beatrix Potter series. The red squirrel is one of our most iconic, native and much-loved small mammals, and seeing one for the first time is a special moment that everybody should experience.

In terms of ecological niche, the red squirrel is a key seed disperser for our native tree species such as Scots pine (Pinus sylvestris). They also spread mychorrizal fungi spores that are incredibly important for their symbiosis with trees. Red squirrels therefore play a vital role in the regeneration of coniferous woodlands which are also an important habitat for other species like the goshawk, pine marten and wildcat.

What are the threats to red squirrels?

The main threat to the species has been the introduction of the invasive grey squirrel (Sciurus carolinensis), brought over from North America by the Victorians in the 1870s.

Not only do grey squirrels outcompete reds for food and resources, but they also carry the squirrel pox virus. This virus is fatal to reds, yet is carried by greys without any impact on their health. Recent studies have shown that up to 100% of grey squirrels in an area can be carrying the virus. Where the virus is present, greys replace red squirrels up to 20 times faster than through competition alone.

Unfortunately, red squirrels face numerous other threats such as predation by domestic cats and dogs, roadkill and habitat loss and fragmentation.

Red squirrels and their resting places receive full protection in the UK under the Wildlife & Countryside Act 1981. Grey squirrels are listed on Schedule 9 of this Act, which makes it illegal to release a grey squirrel or allow it to escape.

Please report sightings of red and grey squirrels. This will help us to accurately map the distribution of both species throughout the project area.

The easiest way to report red squirrel sightings is through the iNaturalist app. Click here to view the squirrel observations in your local area and add your own sightings to our iNaturalist project.

You can also record a red squirrel sighting by completing this form.

If you spot a grey squirrel or a sick red squirrel, please call 07590 745862. For general enquiries please email red.squirrel@lancswt.org.uk.

How you can help red squirrels

You can also help the great red squirrel comeback by joining the local volunteer group dedicated to red squirrel conservation in our area: Red Alert (Lancashire & Merseyside). There are local group meetings every season, so if you're interested in joining in and learning more then please contact us.

If you're lucky enough to have red squirrels visiting your garden, please clean any feeders and water bowls regularly. Sterilising feeders used by reds and greys will help to minimise the risk of squirrel pox and any other diseases spreading. Also make sure you provide a variety of foods such as monkey nuts, hazelnuts, sunflower seeds, apple, carrot and fresh water.

Remember, feeding should only be supplementary. To ensure that red squirrels still forage naturally, only provide food every few days. 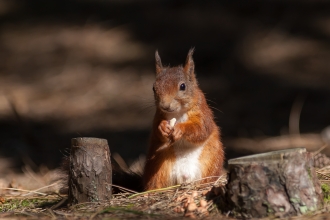 With their distinctive russet fur, tufted ears and twitching tail, a red squirrel is a captivating sight.