Bee expert Ben has worked for Lancashire Wildlife Trust for 19 years and recently authored the 'Bees, Wasps and Ants of Lancashire' book which compiled all records and studies of this group of insects from the late 1800s until recent years.

It's no secret that bees are declining across the UK, but what's the picture like in Lancashire? Lancashire Wildlife Trust bee expert, Ben Hargreaves, discusses the gains and losses.

Threats to bees and the decline in bee numbers (alongside many other insects and plants) have been widely reported, but despite the large number of wild bee species in Britain – around 270 – and Lancashire around 132 – much of the media focus has been upon honey bees. Honey bees are generally kept in hives and as such populations are artificially maintained; although they do escape and form feral colonies (some of which can survive for a number of years) they are not closely related to any of our wild species. Their closest relatives are some of the bumblebees, which also have a social structure and carry pollen on the hind leg in what is called a 'pollen basket'.

Which bees have we lost?

Although there are some threats common to both honey bees and their wild counterparts (including disease and the use of chemicals such as neonicotinoids) – the decline in some of our wild species has occurred over a much longer time period and has generally been caused by loss of habitat, which has in turn come about through large-scale changes in land use and land management. Though these changes largely took place around the period of the First and Second World Wars – when much of the land was ploughed, resulting in a huge loss of large areas of wildflower-rich meadows – the rapid decline in bee species, both locally and nationally, started much earlier (notably from the mid to late-1800s).

Due to our north-west location and oceanic climate (more rain and usually cooler summers) Lancashire has always had fewer species of bee (only half of the recorded UK species). Of the 25 bee species that have become extinct in Britain since records began, none ever occurred in Lancashire. These were possibly never common species and most would have been at the northern limit of their distribution in the south of England.

In fact, Lancashire has not fared badly compared to the national picture - in terms of species extinction only three are known. The great yellow bumblebee (Bombus distinguendus) – a large and (unusual amongst British bumblebees) mostly yellow species – was widely but sparsely distributed throughout Britain and Ireland historically, though with a strong northern bias. Records from Lancashire (late-1800s) are from Chat Moss – the last record from Cheshire (Delamere) was in 1927 and it remained a fairly common species in Cumbria until the 1940s, though has since vanished from much of Britain and Ireland, surviving only in small populations on the Western Isles of Scotland and on the West Coast of Ireland. Although habitat loss was the principal driver of extinction for the great yellow bumblebee over much of Britain – as with declines in many bumblebees – the particular biology of the species (it has very small colonies compared to other bumblebees, with far fewer workers) will not have helped.

The shrill carder bee (Bombus sylvarum) was previously found in Lancashire (widespread until the early-1900s), but there have been no records of this species since the 1960s. Nationally, it has declined hugely, though in a southern direction and the reasons for the decline, though not fully understood, undoubtedly include habitat loss. The loss of the extensive wildflower-rich (especially legumes) meadows that were cut and grazed has impacted bumblebees particularly and especially the longer-tongued species that benefit from the abundant clovers and bird’s-foot trefoil. Bumblebees have a long life cycle and usually produce a large number of bees, so place a greater demand on the landscape than solitary bees and have, therefore, suffered most severely from the specific loss of species-rich grassland.

The loss of extensive wildflower-rich meadows has impacted bumblebees particularly - especially the longer-tongued species that benefit from clovers and bird’s-foot trefoil.

Another distinctive, much declined species (often referred to as Britain’s rarest bee) is the large mason bee, also known as the cliff mason bee (Osmia xanthomelana). This smart, partly golden-haired mason bee is one of two British mason bees to build mud nests. In contrast to the red mason bee, the large mason bee’s habitat is entirely coastal and this precarious existence has likely led to the complete loss of some populations as the soft rock or mud cliffs which they nest in collapse. Never common in Britain, it had scattered populations on the south and west coasts of England but declined from the mid-1800s. The last Lancashire record was from Liverpool in 1835. It is feared that the bee is extinct in all but one or two isolated areas of the Llyn peninsula in Wales.

In contrast to the great yellow bumblebee, the large mason bee is a more heat-loving species (found into Greece and Spain), so climate change is unlikely to have been a factor in the decline of either species. Though, of course, it is not known how they'd respond to a changing climate had they had healthy British populations in the first place.

Although not extinct, several other Lancashire species have declined worryingly. These include the bilberry bumblebee (Bombus monticola) and tormentil mining bee (Andrena tarsata) – still present in upland areas of Lancashire but much declined. Other species such as tormentil nomad (Nomada robertjeotiana) and the cuckoo wasp, Vespula austriaca, have not been recorded since the early 1980s and their current status is unclear, though they were always very rare.

Which bees are doing well in Lancashire?

In a surprising contrast, the number of gains in Lancashire outnumber the losses!

The tree bumblebee (Bombus hypnorum) spread rapidly and totally throughout England from 2001 and now is found well into Scotland. The reason for such a rapid spread is – as with rapid decline – not fully understood but this bumblebee usually nests above ground (in trees, in bird boxes and the eaves or roof spaces of buildings) so may have had little competition for an available, previously unoccupied ecological niche from other bumblebees. A similar rapid expansion nationally has led to the ivy-bee (Colletes hederae) arriving in Lancashire, though it is still uncommon and largely restricted to Merseyside and Silverdale.

The hairy-footed flower bee (Anthophora plumipes) – named after the males who have long hairs on their legs – is a 'rebound' species. This means it was widespread and locally common pre-1900 in Lancashire but disappeared in the early-1900s. It has now recolonised Lancashire and northern England (most common in Merseyside) and the reasons for this reversal of fortunes is not known.

Other newcomers include the wood-carving leafcutter bee (Megachile ligniseca) and silvery leafcutter bee (Megachile leachella) – the former now widespread in Lancashire, the latter locally common on the Sefton coast – and other smaller, easily missed bees like the smooth-gastered furrow bee (Lasioglossum parvulum). These last three species seem likely to be responding to climate change, as previously they were essentially southern-biased species. As not all bees are flying northwards at a rate of knots it is possible that some species are responding to a changing climate more rapidly than others.

It is unfortunate that much of the change to the distribution of bees in Lancashire has occurred historically and there is little that Lancashire Wildlife Trust can do to reverse the vast, historical changes to land use. However, the extensive work on the mosslands (including – critically – the restoration of flower-rich habitat) will undoubtedly have benefits for many bee species, including those that are closely associated with heathers and other acid-loving plants. At Little Woolden Moss, Jamie Lawson is creating some bee banks and looking to increase the cover of typical heathland plants which should provide a great habitat resource for nesting and foraging bees in the future.

All bees need flowers for nectar and/or pollen so sites with a wide range of flowering plants throughout a long flowering season will often be the areas with the strongest and most diverse bee populations. The sandy geology of Brockholes attracts a range of ground nesting bees (and wasps) which are uncommon or rare in Lancashire, while extensive saltmarshes such as those at Barnaby's Sands and Burrows Marsh (though much less well-studied) have the potential to support good populations of bees, especially in late summer. 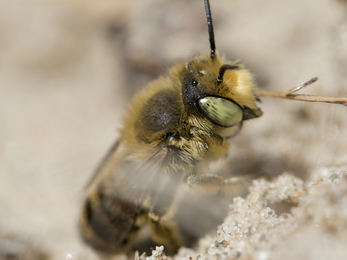 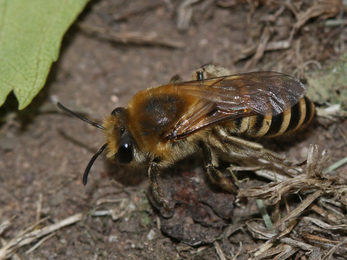 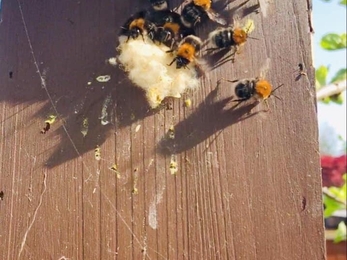 How to do your bit for bees at home

One of the most important things you can do for bees is to create a bee-friendly garden with as rich a diversity of flowering plants as possible. These can include long flowers, composites and umbellifers, and should encompass a long flowering period, so there is nectar available to bees through every season.

How to garden for bees

It is also good if you can fit in a variety of native plant species, as some of our bees are specifically adapted to or associated with a limited number of plants - sometimes a very narrow range! The ivy bee, for example, forages mostly from ivy, while the tormentil mining bee exclusively forages poll from Potentilla.

Another tip is to pay attention to the general structure of the vegetation. Most insects in Britain live in or have evolved from a woodland edge environment, which can be mimicked with a range of plants from ground cover to bushes and large or small trees.

Given the struggles that bees face and the continual loss of habitat, if we don't act soon then gardens, parks, brownfield land and nature reserves will become the important bee strongholds of the future. To ensure the survival of some of our most vulnerable (and even some of our most common) bees, we also need to restore the wider landscape; joining the dots between our gardens and nature reserves to create corridors of green space that bees can use to forage and travel between sites.

Together we can reverse the catastrophic decline of insects

Discover the different ways that moths and butterflies spend the winter.

Meet the moths of our wetlands and reedbeds

Moths are often overlooked, misunderstood and under-appreciated insects, yet our wetlands and reedbeds are home to some incredibly…

Look more closely at the wild places around you and you never know which cool critters you might find! Here are some species you could…